When trying to clip the hedges that have grown with no sense of responsibility in all the rain, reaching balanced on one leg on a wobbly stone wall with a pair of shears, there is a certain temptation. This temptation is to ignore all thoughts of safety and blindly try to reach too far, or stand on something too insecure or ignore the limits of our tools.

The thing is, there are three different types of gardener, and we can learn something from each of them. There is the neat gardener, who always has trimmed borders and hedges, never a blade of grass out of place. Then there is the opposite, perhaps more organic, gardener where plants are allowed to grow out and do their thing. Finally there is the designer gardener – I don’t mean the whole garden is stuffed with very expensive additions, but that the garden itself is designed. And this is the key: whatever type of gardener you are, have a plan.

Photo by dorena-wm on Flickr. Used under Creative Commons license.

The point is, when the rain spoils the summer and your hedges (like mine) are both inaccessible and two feet too high, don’t just hack at them in an embarrassed attempt to get them straight: take your time, keep safe and do it right. Every gardening task, from cutting the lawn to planting your vegetables, should be seen as a part of the overall plan.

So, if you have let your hedges grow too high, your need to ask yourself the question why this is the case, first of all. Maybe, like me, the combination of work commitments and bad health (as well as continuous torrential rain) meant the garden came second for a week. But perhaps there is another reason you didn’t trim the hedge?

I have to confess I don’t like privet. It’s the smell I can’t stand, and this hedge is definitely not a part of my plan for the garden. As soon as I can I will be removing it. For the time being, however, it has to stay because it does create an effective screen. But I don’t want a screen, I want the space currently taken by the hedge for a new herbaceous border. Perhaps in the back of my mind, my new plan added to my tardy trimming!

But even the best plans don’t always go well, and the garden has its own way of telling your when the plan needs to change, but don’t confuse temporary variations with a bad plan. Clearly it would be better to put a pond in the wettest part of the garden, but just because the irises aren’t flowering it doesn’t mean you should dig them up and start again.

Listening to the garden is important, and it will soon tell you when things are not right, but again, you need to know how to listen. The gardener’s mantra should always be: The garden is not a wilderness. Just because plants grow, it doesn’t mean they are right. Let me give you an example from our new garden. We have been here a year and the garden is dominated by lilac. They have been allowed to grow tall, branches everywhere and broken wood all over the place – lilac is prone to growing like this, breaks and basically wild. 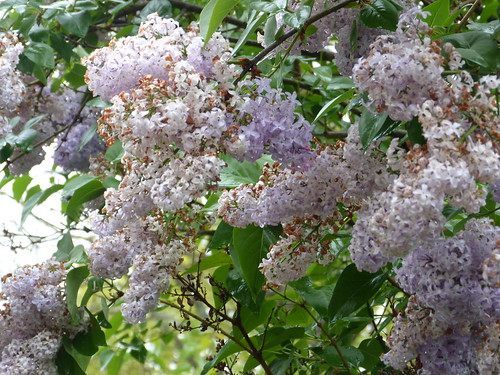 Photo by bunnygoth on Flickr. Used under Creative Commons license.

The majority of lilac becomes infected by fungus, and these are no exception, but they are huge. Just because they are growing doesn’t make them right. So part of my plan is to replace them. But with what?

Planning starts with a drawing, for me. But a good deal of sitting down, wandering about the garden, pondering what is growing where and getting to know where the sun goes, and where the weeds grow is an important part of the planning process. And once you have a plan – stick to it!

People get confused between the ‘doing’ bit of the plan, which can take years, and ‘maintenance’ and consequently miss out on trimming the hedges when the plan says they are going to come out.

This whole idea of following a plan brings gardening out of a series of tasks to be done and into a way of life. Gardening then has a purpose, and pretty soon you are addicted to it.

So, what am I going to replace all those lilacs with over the next couple of years? Lots of things. A new herbaceous border like the ones at Arley Hall in Cheshire for a start, and perhaps, as a nod to my father and grandfather before him, an old fashioned dahlia garden – earwigs and all!

Previous: Our Magical SleepOut
Next: Lessons from the Garden SleepOut