This weekend marks a traditional holiday period renowned for bunnies, chocolate eggs and hot cross buns. However, the traditions of Easter trace back to early AD with the resurrection of Jesus Christ, making this one of the most important celebrations in Christianity. Primrose are here to help answer a few key questions regarding the festive Easter holiday, so sit back and enjoy the read! Why do we celebrate Easter?
Based on the new testament of the Christian Bible, Jesus was crucified on a cross on Good Friday. However, when Mary Magdalene visited the tomb where Jesus lay a couple of days later, it was empty. An angel informed her Jesus had risen, and so started the celebration of Jesus’ resurrection. Today, we celebrate the week leading up to Easter as ‘Holy Week’, whilst many also observe the 40 day period of Lent to replicate Jesus’ sacrifice, and the 40 days he spent walking across the desert. The term ‘Easter’ did not originate around the same time however. It is believed to derive from the goddess of rebirth ‘Eostara’ , although other sources argue it derives from ‘Eastre’, the goddess of Spring, some years before Jesus’ resurrection era. With Easter being the oldest Christian holiday, it’s important to know the foundations of this festive period. Where do hot cross buns come from?
Hot cross buns are a tasty addition to many over the Easter period, and are often sold all year round in major supermarkets, but what have they got to do with Easter? As you may have already guessed, the cross placed upon the bun is to represent Jesus’ body and his crucifixion. Currants or raisins are most commonly used to add flavourings, which represents the spices used to embalm Jesus at his burial. Therefore, traditionally they are eaten on Good Friday to match the date with this event. Queen Elizabeth I once passed a law stating sales of buns and spiced cakes were limited to funerals and the Friday before Easter!

Why does Easter fall on a different day each year?
Easter is a movable date and can fall as early as March 23rd (the earliest Easter in the last century), but commonly falls between the very end of March and mid to late April (25th is the latest date, which will occur in 2038). It is calculated as the first Sunday after the first full moon following the start of spring (based upon the common Gregorian calendar). This first full moon is also known as Paschal (Passover) to symbolise Jesus’ death and resurrection around the same time as the Jewish Passover. There have been discussions to have a fixed date, but this is yet to happen. What do chocolate eggs have to do with Easter?
The custom of giving eggs as a present at Easter is to celebrate and resemble new life. When the egg is cracked open, it resembles the empty tomb where Jesus lay. Many believe the egg also represents fertility, rebirth and a new start. Chocolate eggs originated in the early 19th century, with early production in France and Germany, but Cadbury’s being the first mass producing egg maker. Admittedly, there isn’t much to link chocolate with Easter, other than consumer demand for a flavoursome, popular gift. What makes a great Easter present?
Easter is a time for giving, and many will present a (chocolate) egg to their recipient. However, if you wish to offer something different and unique, you’re spoilt for choice. A traditional ’Mr Bunny’ statue or a topiary rabbit would look great in anyone’s garden. Or if you’re feeling adventurous and off the norm, an Easter Island water feature! 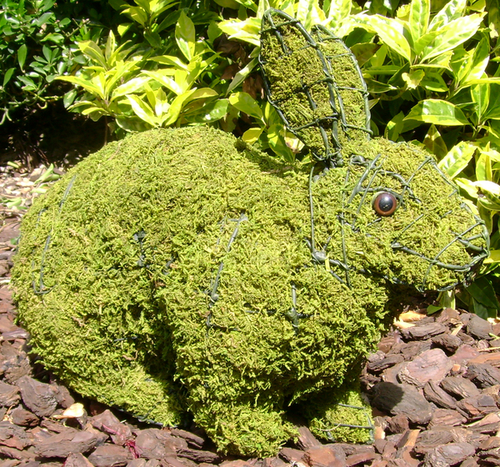 Whatever you do with your Easter weekend, we hope you have a great one! Previous: How to Grow Moss in Your Garden
Next: Garden Privacy Ideas: 5 Tips to Stop You Being Overlooked